Lucknow Literary Festival, an annual flagship event in the literary and cultural calendar of Lucknow!

Inaugural day offers talk shows, book launches, and workshops as varied as comics, Awadhi, Hindi and Urdu poetry, Women empowerment and Social networking impact. A workshop on movie scripting, discussion on Lucknow’s stature in Urdu Poetry, growing comic culture, challenges of contemporary Hindi poetry and a special session for past and future of Awadhi complement each other throughout the colorful day. Sufi Hindi rock band Faridkot concludes a day punctuated with Neelesh Mishra and his troupe weaving a story around songs.   Inauguration... 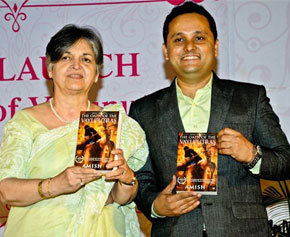 ‘The Oath of Vayuputras’ by Amish Tripathi

‘The Oath of Vayuputras’ is the third and the concluding part of the best-selling Shiva trilogy by Amish Tripathi. ‘The Immortals of Meluha’ d ‘The Secret of the Nagas’, the first two novels have been commercial successes with million copies...

A sixteenth century lost art’s performance,  describing the fifteenth century mystic saint poet Kabir. Dastan Dhaai Aakhar Kee - a story on Kabir - the poet and the lover is composed and performed by Ankit Chadha, under the direction of Mahmood...

If not its birthplace, then Lucknow is certainly one of the pilgrimage sites of Urdu poetry! The region bears a distinct influence on Urdu ghazal khwaani and Lakhnau school being one of the most prominent schools of Urdu Poetry. The lyric and... 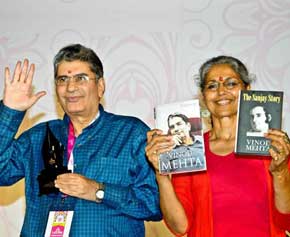 ‘The Sanjay Story’ by Vinod Mehta

Vinod Mehta in conversation with Mehru Jaffer was an interactive session regarding Sanjay Gandhi. Vinod Mehta writes the biography of Sanjay Gandhi, India’s most controversial member of a Prime Minister’s family. As the title suggests story begins at Anand Bhavan,...

Day two of LLF features launch of some popular books dealing in sufism, mysticism, fiction, political biography, fantasy and poetry. Poetry and Lucknow and cinema remain the flavor of day with a documentary screening on the city’s Piscean symbol, a discussion on the celebrated nawab Wajid Ali Shah, the romance of poetry and cinema, history of dastangoi and the discussion on century of Indian films. Thoughts on media regulation and a session of gadgets catch young patrons. The day features...

This message is only visible to site admins
Problem displaying Facebook posts.

Error: Error validating access token: The session has been invalidated because the user changed their password or Facebook has changed the session for security reasons.
Type: OAuthException
Code: 190
Subcode: 460