Besides Wajid Ali Shah award, the Pride of Lucknow awards were conferred on three distinguished luminaries. 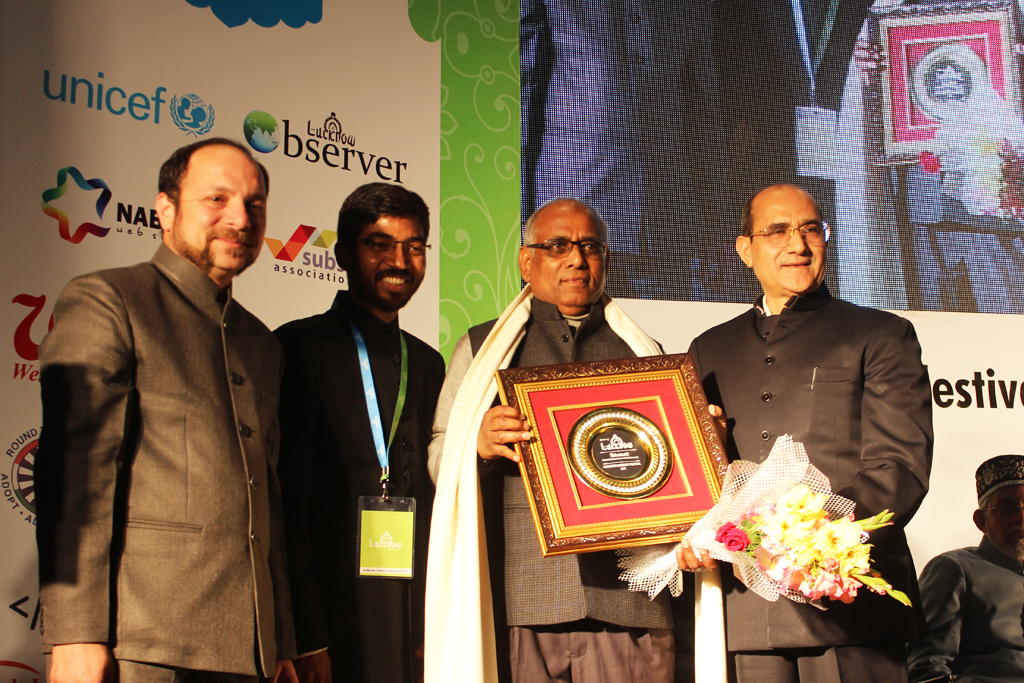 The Pride of Lucknow award for the contribution to Hindi literature was bestowed on author Shiv Murti. Born on March 11, 1950, Shiv Murti is one of the leading voices in contemporary Hindi fiction. Hailing from humble background, his life was full of struggle. But the best steel is made when iron is passed in hottest temperature. This holds true for author Shiv Murti. A person of few words, he let his works do the talking for him. His first story ‘Mujhe Jeena Hai’ followed by ‘Paanphool’ was published when he was studying in 12th standard. Thereafter he never looked back. His works depict the plight of rural folk in true light. Caste politics, power politics, poverty and Dalit problems form the theme of his works. One of his best novels ‘Triyacharitra’ portrays the life of a young girl who is false implicated for having an illicit relationship and as a consequence has to bear the brutal punishment handed out by gram panchayat. This novel was later made into a movie by Basu Chatterjee. Since his works paint a picture of rural life in true fervor, his fans consider him as second Premchand. But he brushes aside this compliment saying: “Premchand is Premchand. I can never replace him.” His other novels are Trishul and Tarpan. Keshar Kasturi is a collection of stories authored by him. Now his fans should gear up for the re- release of his novel ‘Akhiri Chhalang’. Shivmurti has won Kathakram and Hans award in the past. Though he is satisfied with the kind of Hindi works produced today, he expresses concern at the youngsters losing interest in Hindi literature. 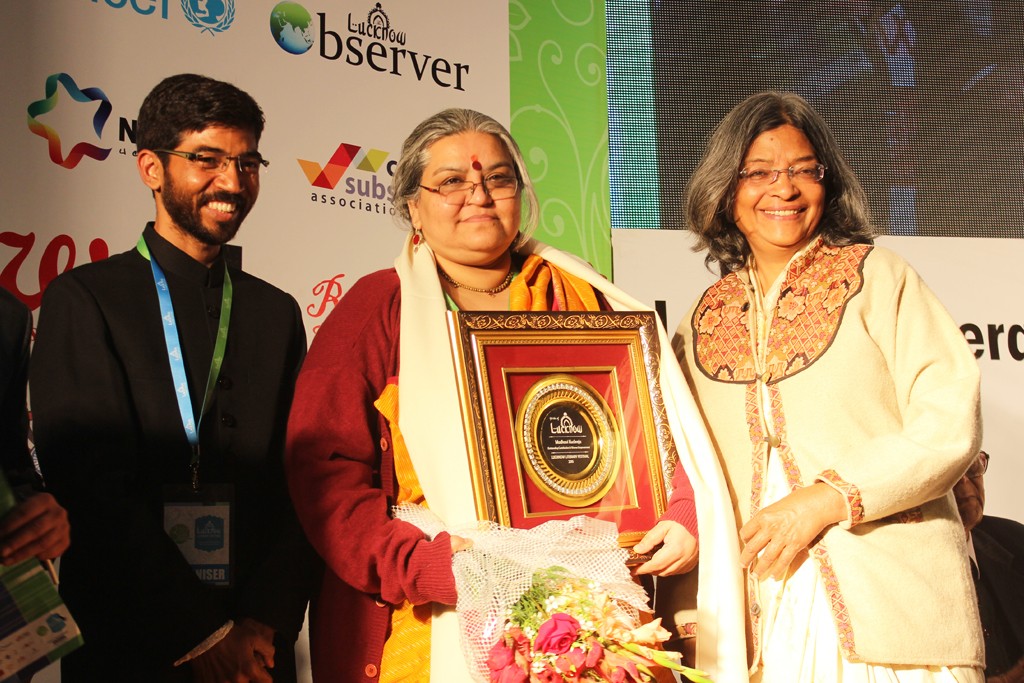 The Pride of Lucknow award for excellence in women empowerment was bestowed on Madhvi Kuckreja, a social worker and founder of NGO Vanaangan. Humbled to receive the award, she considers herself fortunate to have won it though she had shifted her base to Lucknow only few years back. She has set up a shop, Sanatkada here that sells handicrafts, functions as a café, a book club and a film club, all rolled into one. Madhvi has supported numerous women-led, grassroots-level organizations to emerge as transparent, vibrant entities that are sensitive to women. Internationally, she has worked on building opinion against women being subjected to violence in Tajikistan, Kazakhstan, Kyrgyzstan, Sri Lanka and Sudan. Before moving to Lucknow, she was earlier working in Bundelkhand for alleviating the problems of Dalit women, who are entangled in triad of poverty, caste discrimination and gender subjugation. Though they have been financially independent for long, Dalit women are subjected to discrimination and violence in all forms manifesting itself through rape, public humiliation, or honor killings. Another common punishment for breaking community rules that is also used simply for vengeance is public stripping and parading of women. Violence can also take an extreme form with lynching of women labeled as witches or dayans. Domestic violence however, cuts through religious, caste and class boundaries-dowry related death caused by “accidental” burning of women thrives in the state. Moreover, when women gain property rights-usually after being widowed-they become targets of violence by members of the family or community. Therefore, instead of being economically empowering, property is itself a reason for violence against women. She expresses satisfaction that Due to the collective efforts of her NGO, knowledge levels among Dalit women have increased and they are assuming leadership roles in the village community. 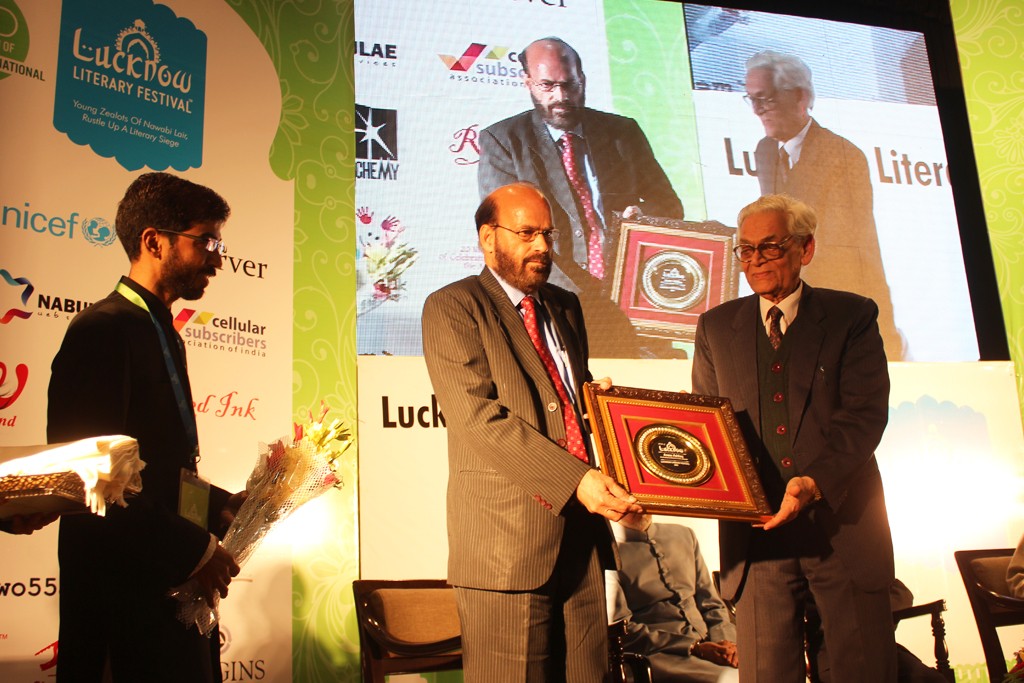 The third Pride of Lucknow award was conferred on noted Urdu author Anees Ashfaq. His work ‘Dukhyare’ highlighting his close relationship with elder brother carries the undertones of declining affluent culture of Lucknow. Elated though to receive the award, he considers ‘Qalam’ as his biggest award. “My writings are useless until they fail to strike a chord with genuine readers,” he said on his felicitation. So what make him pursue writing in Urdu? “I was an avid reader at the age of 18-19. Credit goes to my mother for imparting me lessons in Urdu and shaping my language as it is today.” He expresses concern at the declining habit of reading in today’s youngsters and their overriding ambitions to become stars overnight. He, however, lauds the initiative of Lucknow Society and stresses such rendezvous should be encouraged as they serve as a platform to bring genuine writers together and instills awareness among people. His writings reflect genuine critical analysis of the contemporary scenario. He believes that writings on Lucknow today are not portraying it in true light. With his desire for cultural revival of the city, his upcoming next novel is also set in Lucknow.

With conferring of these four awards, honouring of the dignitaries at the festival came to an end. We at Lucknow Society are thrilled to award best of talent in the city and will continue to reward blossoming excellence in the years to come.