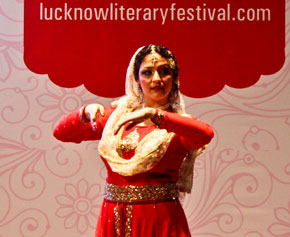 Among many Indian Dance forms Kathak stands out being the most graceful dance form. In Lucknow, Kathak developed mainly in the court of Nawab Wajid Ali Shah. It was in this period that Lucknow gained maturity and perfection. The Lucknow Gharana of Kathak dance is characterised by graceful movements, elegance, precision and delicacy. Dance type in Lucknow is artistically combines with classical music like thumri, dadra and horis. Many sufi followers find Kathak the most suitable form of dance for sufi songs or sayings. Presently, Pandit Birju Maharaj, son of Pandit Achchan Maharaj is considered the pioneer for the Lucknow gharana. Natalia Hildner from U.S. is one such example who finds her soul in Kathak dance. She has been trained under Birju Maharaj and is a fond propagator of Kathak form of dance. She is of the opinion that “what we recognize as Kathak today was born in Lucknow. Where did its nazakat nafazat, salaami, thaat, mijaaz and andaaz come from? Kathak is not just a dance, but also a journey of self-discovery. Kathak communicated something beyond this world…from its stories to its poetry, from its rhythm to its virtuosity, from its depth to its playfulness, from its colloquial flavor to its elegance, from its grace to its power”.