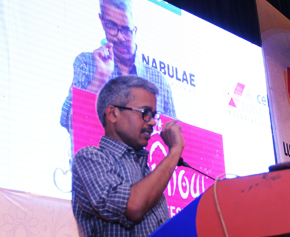 Former managing editor of India Today Dilip C. Mandal discussed the current scenario of media and the changing public sphere in a power packed session. He emphasized how social media has captured the Indian audience, and how it multiplies geometrically. He talked about idea sharing and benefits of social media. Speaking of the JNU students’ sedition charges issue, he said “We are a nation living in fear. “ It was a highly informative session; the audience took an active interest, raising many questions about the issues he mentioned.